In our April Let’s Talk Talent roundtable, participants discuss the challenges behind generating high-performance teams in the charity sector

Let’s Talk Talent had the pleasure of hosting another great roundtable on April 22nd on the topic of creating a high-performance team, and the important role employee experience plays in supporting this goal. But more specifically, we looked at team performance within the not-for-profit sector. Because when you look at it, it’s hard to know if the underlying principles that drive high performance within an organisation apply equally amongst all businesses. Is the reality of the charity sector the same as that of a banking institution when it comes to team dynamics? Should we all use the same methods and tactics to create collaborative, motivated and effective teams that are more focused on contributing to the wider organisations’ goals than their own? Or does the organisation’s sector, purpose and history change the game? We tried to find out during our session, expertly led by Jisc’s Director of HR Andy MacDonald. As Jisc was set up to support the education sector through technology, we had the perfect case study to get the discussion going. And going it damn well did, with over 20 participants from all kinds of industries, from financial services and education to other not-for-profit organisations. All of which were hoping to answer the main question: is it harder to create a culture of high performance and work towards achieving business goals when your mission isn’t quite commercially focused?

So where did Andy start? Well, like any good HRD, with a good old audit of the situation. In Jisc’s case, there were a few known issues that could be counterproductive from the start and would need to be addressed before the HR team could even begin to work on driving results. Those challenges were highlighted as per below:

Sounds familiar? Yes, that’s what most of the group thought too. Seems like no matter which sector you operate in, driving high performance starts with fixing the people challenges first. In short, it’s about putting people at the core of everything you do. Collaboration and trust, the foundations of team performance, do not happen on their own. Those need to be cultivated, and once staff feel secure and valued, their contribution will increase. No matter which type of organisation you operate in.

So how did Jisc set about changing its internal culture and having the kind of employee focus that generates trust, psychological safety, and ultimately high performance as a result? Andy started with his people strategy, which he created from scratch as the existing one was too HR-focused, and not quite putting employees at its heart. He also set out to recalibrate the organisation’s compass by establishing a new ‘True North’, something for everyone to work towards and align on. As he says: “Never underestimate the power of bottom-up culture!” Once this clear destination was established, Jisc also defined a set of guiding principles that would offer a common vision for the Jisc internal culture.

But in order to achieve results and put people at the very core of the business, Andy also had to make the HR team truly customer centric. And this is where Let’s Talk Talent came in. Over four months, we worked with Andy and his team to identify their focus or, as we like to say, their big exam question. In this case, it was identified as ‘Creating an outstanding candidate and employee experience.’ Through five sprints, during which we used data and insights as well as tools such as persona mapping and customer journey navigation, we were able to establish HR priorities for each identified customer group. The HR team was now fully aligned and could begin turning these priorities into concrete initiatives that would ensure staff feels valued, engaged and that their contribution matters.

From the discussions that followed Andy’s presentation, it’s clear that generating a high-performance culture always starts with putting people at the core of everything you do, no matter what your business sector, mission or goals are. But from our session, it seems that what may differ from one organisation to the next are the tactics deployed to address the specific issues hindering the creation of collaborative and innovative teams. Some of those issues may be sector-specific indeed, such as those highlighted by Andy’s case study, but the solution remains the same: putting your people at the core of everything you do and truly getting to know your customers’ needs. Here everyone around the (virtual) table agreed: driving high performance is not about focusing purely on business results. It always starts with winning the hearts and minds of the individuals within the organisation.

One last takeaway from the session? Well, we were reminded that this work takes time and effort. There is no silver bullet or magic formula to win your employees’ hearts, but if you do want to create a high-performance culture like Andy is currently doing at Jisc, start with identifying your core exam question. Always go back to it, get feedback on it and ensure that you remain agile and open to changes that may occur along the way.

We’d like to thank all our participants for what turned out to be fantastic knowledge exchange, and particularly our host Andy MacDonald and Jisc for sharing the kind of innovative and successful case study that had everyone rearing to go out and try something new.

And if you missed our roundtable, don’t worry. We have another roundtable coming up in June. Fill in the form on that page and we’ll send you all the details. 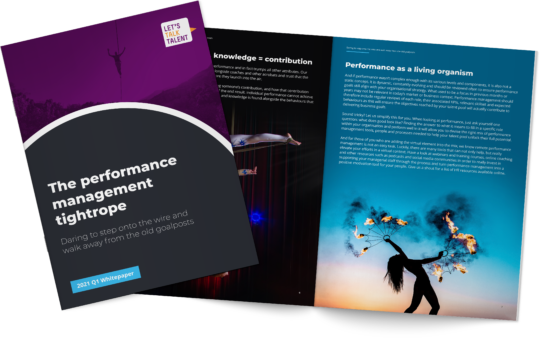 Find out how to drive a .
Download our Whitepaper now
Comments are closed.