The Changing Face of Careers

The changing world of work and careers have never been so well documented, yet for many it’s hard to simply keep abreast of the latest trends and advancements let alone know the what to do to remain relevant, effective and future proof.

The truth is that the increasing challenges of running a sustainable and successful organisation for employers and navigating a fulfilling and life enriching career path for employees can be equally bruising.

While many organisations juggle the paradox of outsmarting and outperforming an ever-growing number of competitors while constantly enhancing the employee experience all with less resources, rapid changes in written and unwritten expectations from a workforce containing five generations of employees further complicate a tricky landscape.

According to the World Economic Forum, macro career trends mean many of us are choosing to move jobs, change careers, retain multiples jobs and career paths regardless of our levels of engagement.

What then should organisations do? The answer isn’t simple, but the good news, thanks to a wealth of research and pockets of excellent practice, is that there are effective solutions that will increase your organisation’s ability to attract and re-attract, develop and retain the right people through your practices.

Despite such unprecedented change to the global labour market amidst the advent of The Fourth Industrial Revolution, we consider how you as senior HR and Talent professionals can successfully create a culture where your people’s career can flourish.

Over the next few months through a series of blogs and articles, we’ll explore the changing face of careers and career management. Expect plenty of hints, tips and practical ideas to enhance your employee experience.

Aside from summarising the key messages from the wealth of data and insight being published, we’ll also share several case studies from client organisations of varying shapes, sizes and industries whose approaches are slowly solving the riddle that is managing the modern career.

True or false: employees are simply not interesting in building a career with one organisation?

Your response to this question may significantly impact how you shape your people strategy and more specifically how you tackle HR’s trickiest hurdle; career management.

The current perception and oft quoted ‘fact’ which has permutated both HR and business circles is that employees spend no longer than a few years with any company. But is this true and, more importantly, why?
For the answers, let’s consider the evidence.

Nearly half of respondents planned to change jobs with 24 months while a third couldn’t see a future with their current employer beyond 75 months. This trend is a far cry from the days of school or University leavers joining an organisation and staying until they received their carriage clock.

Does this mean that we’re all staying in jobs for less time? If so, should we focus less on building well-defined career paths?

It may surprise you, but according to research from the U.S. Bureau of Labor Statistics, employees today stay longer with a company than they did 25 years ago. In fact, the average employee tenure has risen from 2.5 years in 1983 to 4.6 years in 2014.

While the UK government doesn’t collect equivalent data, according to research by insurer LV=, on average a UK employee will change jobs every five years.

So, what can we take from this? Well, we know that the appeal of the gig economy as a viable alternative to permanent employment for all generations is real. Modern studies tend to focus on millennials and there is evidence to suggest that newer entrants into the workplace are less loyal.

There’s a strong misconception that people born at a certain time leave organisations after a certain period for the sake of it. There’s just one snag…there’s no meaningful evidence to support this assertion.
In fact, there’s a growing pile of evidence to support the notion that employee turnover especially amongst younger workers is a result of disillusionment with modern business practices and the corporate world.

The very same Deloitte study mentioned above found that a lack of diversity, inclusion and flexibility were the main reasons that millennials and generation Z sought out new employment.

While studies like these don’t dispute evolutions in the global labour market such as the rise in portfolio careers or self-employment, they may go some way to dispel some costly myths. Namely, that most employees leave companies after “a couple of years” and that they leave because the egg timber’s run its course.

If five years is the average length of service your organisation can expect from someone, then you’ve got 1825 days to shape an excellent employee experience.

Why? So, you can be one of the fortunate few with a higher average tenure, higher brand reputation and lower recruitment expenditure in addition to the wish list identified in the Gallop study discussed earlier.

Now, wouldn’t that be nice?

But it’s also worth considering the flip side. Organisations like Unilever and PwC have built powerful ex-colleague alumni because (believe it or not) employees can and do leave organisations they love, sing their ex-employers’ praises and, wait for it, return to work there with broader and deeper experience and skills.

The concept of ex-employees/alumni as advocates and brand ambassadors has some serious legs. According to social media site Glassdoor, the most powerful influencer of potential candidates’ perception of an organisation is their friends’ and family, followed closely by sites just like Glassdoor. You can and now should add ‘re-attract’ to the core functions of your HR department.

In summary, there’s almost no evidence to support the tale that we’ll all pack in a job after the clock strikes 12 on our two-year anniversary regardless of how we feel about our work. Although younger generations may leave employment earlier, this is due to perceived mis-aligned values, lack of flexibility, diversity and fairness in the workplace among other reasons. In addition, investing in career management is a worthwhile and rewarding endeavour that plays a part (not predicative) in higher engagement and business outcomes.

Therefore, perhaps it’s time to stop telling our business leaders that the reasons for voluntary turnover lay at the door of a “job hopping” craze spearheaded by the latest generation of employees.

Finally, how do you best manage careers within a rapidly changing modern organisation impacted by unprecedented advances in society, technology and expectations?

Over the next few months, we’ll be sharing practical tips, advice and case studies from organisations daring to be bold and brave. First up, King’s College University London and their winning Career Philosophy and Framework.

For your business to realise your ambitions, will depend on you identifying and developing your future leaders.

World class companies are obsessed by Predictive Succession Planning. Seeing it not just as a notion or a fad, but as an essential part of their talent strategy, giving it the energy it requires. 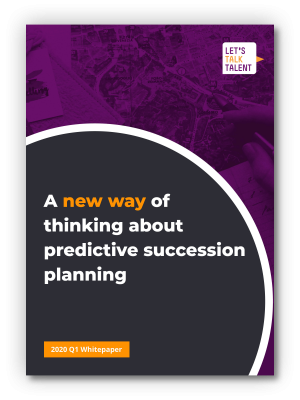